That’s an actual conversation I made up about Lake Bled.  But that’s what it always sounded like to me.  I’d heard it was beautiful and picturesque, though, so it’s been on my list for a while. 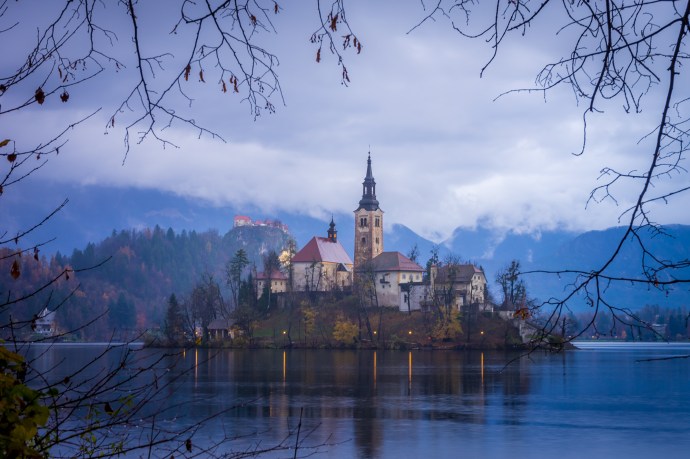 So how did it live up to the hype?

Well, first off, where is Lake Bled?  There’s a country just south of Austria called Slovenia.  It’s a beautiful country with diverse landscapes (from mountain to beaches) and it’s relatively untouristed, at least by Americans.  The capital, Ljubljana, is widely known by the four people I asked as “the hardest capital city to pronounce”.  I tried pronouncing it the other day and pulled like 6 muscles.  Anyway, it’s been long said that the jewel of Slovenia is Lake Bled.  Sitting amidst the mountains, Lake Bled (and the surrounding towns, including Bled) is a bucolic masterpiece.

(You’ll notice I’ve used the word “bucolic” more than once in this post.  That’s simply because I think it doesn’t sound anything like what it means, which is funny to me.  So, there’s going to be some bucolic’ing in this post)

Anyways, the mountain town of Bled (and its bucolic lake) are in the northwest part of Slovenia, not too far south from the Austrian border, so I figured it’d be an easy trip from Munich.  It turned out to be relatively easy, about 5 hours or so from when I landed.  I was decently well-rested, and I’ve made the drive into Austria many times, so I was at least a bit familiar with purchasing the vignettes needed for the highways and everything else.

Where it started to get hilarious was the toll tunnel into Slovenia.  I had already paid for my vignette (a little sticker you put on your windshield that gives you the ability to drive on the autobahns), and there was a lady at the toll booth saying I needed to pay more.  Seeing as I didn’t speak any German or Slovenian, I gestured towards the vignette and she assertively gestured at the 11 euros I needed to pay.  Separately, I had my iphone linked up to my rental car’s stereo and had it turned up a little louder than I realized, when all of a sudden “Real American” by Rick Derringer (otherwise known as Hulk Hogan’s theme song) was playing…loudly.  I generally don’t try to be too obvious or oblivious of an American, so I embarrassedly paid my 11 euros and got on with my business.

Once I left the main highway I made my way to Bled.  Guided by the rental car’s GPS system, I drove to Bled and…right through it.  It turns out the place I had booked was outside of Bled by a good 15 minutes.  Still near the lake, just not in Bled proper.  No biggie.  I got to know the back roads of the countryside around Bled really well.  The majority of them are one lane roads as well, which made for some narrow passes with oncoming cars.  Eventually I stopped to check the address of my B&B to make sure I was heading toward the right place.  It looked ok.  Just as I was about to drive again, a baby deer darted in front of my car, scaring the crap out of me.  Thinking to myself “oh Slovenia, you and your deer” I shifted into first and another baby deer WHUMPed into the side of my car.  Almost literally having the crap scared out of me, I got out and took a look at the car.  It was fine.  It turned out the deer was ok too and scampered off to scare other tourists.

Eventually I found my B&B for the night, Pansion Matjon.  It was very nice and very typical for a B&B.  The room was clean with fast wifi, plenty of parking, and all sorts of Slovenian charm.  It was just located out of the way a little bit.